The only government procurement website designated by the Ministry of Finance

You are here: Home » Supervision » Analysis and Research

近年来我国政府采购规模持续增长，与往年相比， 2018 年的增速明显放缓。 Liu Zhiyi: In recent years, the scale of China's government procurement has continued to increase. Compared with previous years , the growth rate in 2018 has slowed down significantly. On the one hand, the transition from high-speed economic growth to high-quality development in China has become the new normal. On the other hand, the increase in fiscal revenue has been greatly affected by tax and fee reductions. This is reflected in government procurement, which is a corresponding decrease in the increase in expenditure arrangements. It is expected that the scale of China's government procurement will be in a steady growth stage in the next few years, and will not show the same increase as in the past.

2018 年政府采购规模增速放缓，主要原因在于近年来我国严格执行八项规定，大幅压缩三公经费支出，特别是近年来各级政府带头过紧日子的思想，用于满足政府自身运转的经费开支压缩，直接带来政府采购规模增速放缓。 Jiang Aihua: The growth rate of government procurement in 2018 has slowed down, mainly due to China's strict implementation of eight regulations in recent years and a significant reduction in the expenditure of three public funds, especially the idea that governments at all levels have taken the lead in the past to meet the government's own operations. The reduction in expenditures has directly brought about a slowdown in the growth rate of government procurement. Obviously, from the perspective of government operation, this change in growth rate is precisely the performance of fiscal expenditure performance improvement.

The growth rate of service procurement continued to grow rapidly

一方面， 2018 年，货物、工程、服务类采购规模占全国政府采购规模的 22.5% 、 43.8% 和 33.7% ，其中，货物类采购规模为 8065.3 亿元，增幅仅 0.8% ，工程类采购规模为 15714.2 亿元，增幅也仅有 3.3% 。 In the association: On the one hand, in 2018 , the scale of procurement of goods, engineering and services accounted for 22.5% , 43.8% and 33.7% of the national government procurement scale , of which the scale of procurement of goods was 806.53 billion yuan, an increase of only 0.8% . The scale of category purchases was 15.71 billion billion yuan, an increase of only 3.3% . The increase in both of them has been significantly "diving", both hitting a new low in recent years. This has something to do with the procurement departments at all levels actively reducing general expenditures, saving administrative costs, and gradually changing the operating methods of governments at all levels, and the gradual reduction of government departments' administrative needs for tangible entities.

On the other hand, although the scale of national procurement of services last year also decreased compared with previous years, it still maintained a rapid growth trend. 5705.5 亿元和 6376.4 亿元，占服务类采购规模的 47.2% 和 52.8% 。 In service procurement, the government's own services and public services provided by the government to the public were 570.55 billion yuan and 637.64 billion yuan, accounting for 47.2% and 52.8% of the scale of service procurement . Among administrative operating costs, the proportion of service costs has gradually increased. This is an important manifestation of the increasing professionalization and refinement of administrative services. This is also an inevitable result of the marketization and socialization of administrative services. Administrative agencies are increasingly Reliance on social services provided by social subjects; this is also an important manifestation of the transformation of government functions, especially when the proportion of government purchases of public services exceeds the government's own service needs, reflecting the government's increasing contractual delivery of public service production Commit to social forces and promote the improvement of public service quality and efficiency through competition mechanisms. It has transformed the traditional way of direct public service provision by the government, and is an important manifestation of the continuous and in-depth transformation of government functions.

观察近年来政府采购结构变化可以发现，货物类和工程类采购占比均在下降，而服务类采购占比在不断上升，说明一方面存在压缩一般性开支，相应降低货物类和工程类支出比重的情况；另一方面也是政府职能转变的反映，更多转变为服务型，各类行政事业单位采购类支出占比逐年下降，而服务类支出和人员支出比重逐年上升。 Pei Yu: Observing the changes in government procurement structure in recent years, we can find that the proportion of procurement of goods and engineering is declining, while the proportion of procurement of services is increasing, indicating that on the one hand there is a reduction in general expenses and a corresponding reduction in goods and engineering. On the other hand, it is also a reflection of the change in government functions. It is more of a service type. The proportion of procurement expenditures of various administrative institutions has been decreasing year by year, while the proportion of service expenditures and personnel expenditures has been increasing year by year. At the same time, over the years, there have been relatively few large-scale basic constructions of various administrative institutions, and the construction control of buildings and halls has been relatively strict, which has a direct impact on the decline in the proportion of engineering procurement. With the gradual transition of government functions, most of the original self-service expenditures of various administrative institutions have been transformed into expenditures for purchasing services from the society (such as common small maintenance services, conference services, legal services, accounting and audit services, procurement services, etc. Therefore, the substantial increase in the scale of service procurement in recent years is the result of the transformation of government functions.

采购资金不断朝向服务类采购项目，说明政府日益关注和重视涉及民生的服务类采购。 Wang Conghu: The procurement funds continue to be directed at service procurement projects, which shows that the government is paying more and more attention to service procurement involving people's livelihood. 2019 年两会期间回答记者问时提到，民生本身就是天大的事情，要在发展经济的过程当中持续地改善民生，抓住重点难点问题一件一件去做。 State Council Premier Li Keqiang mentioned in a question to reporters during the two sessions in 2019 that people ’s livelihood is a matter of utmost importance. In the process of economic development, people ’s livelihood must be continuously improved, and key and difficult issues must be tackled one by one. This also reflects that the government attaches great importance to people's livelihood issues, guarantees citizens' basic service needs, and strives to develop the tertiary industry to promote the transformation and upgrading of the economic structure.

公开招标仍占主导地位，一方面说明更多单位重视公开招标，认同公开招标和依赖公开招标方式；另一方面也说明高压反腐、公开透明的政策贯彻落实到位。 Wang Conghu: Public bidding still dominates. On the one hand, it shows that more units attach importance to public bidding, agree with public bidding and rely on public bidding methods; on the other hand, it also shows that high-pressure anti-corruption, open and transparent policies have been implemented. Of course, some unnecessary public bidding has adopted the method of public bidding, which indicates that some departments or leaders are afraid to take responsibility, and then they will shirk their responsibility and avoid the risk of psychology and cognition. The decline in the proportion of single sources indicates that on the one hand more and more units and leaders attach importance to government procurement, respect the procurement laws and laws, and no longer intervene in procurement matters too much; on the other hand, it also shows that market competitiveness is enhanced and economic development is active. It's hard to have a domineering situation.

The proportion of decentralized procurement has increased year by year

41.5% 。 In 2018 , the scale of decentralized procurement accounted for 41.5% of the national government procurement scale .

由于近年来我国在政府采购领域不断推进放管服改革，集中采购目录 “瘦身”，分散采购占全部政府采购的比重逐年上升。 In the association: In recent years, China has continuously promoted the reform of decentralized management services in the field of government procurement, and the “downsizing” of the centralized procurement catalogue has increased the proportion of decentralized procurement in all government procurement year by year. This is conducive to fulfilling the responsibilities of the purchaser's purchase subject and guaranteeing the purchaser's autonomy in purchasing; it is also an important manifestation of the continued improvement of China's economic and social development, which shows that China's market competition is becoming more and more abundant, and products that can meet the purchase demand are becoming increasingly abundant; at the same time, it is also an electronic An inevitable consequence of the continuous development of business, purchasers can obtain high-quality and cheap products through various e-commerce government procurement platforms, not necessarily through centralized procurement.

尽管全国政府采购规模增幅趋缓，但在支持节能环保等方面，政府采购的作用依然很 “给力”。 Pei Yu: Although the scale of government procurement across the country has slowed, the role of government procurement in supporting energy conservation and environmental protection is still very strong. There are two main reasons. One is the mandatory requirements at the national level. The bidding documents of all procurement departments or units clearly require priority purchase of energy-saving, water-saving or environmentally-friendly products. The second is the induction of benefits, although the prices of energy-saving and environmentally-friendly products are relatively average. The price of the product is high, but it can really save the cost for the user in the process of use. With the advancement of technology, these energy-saving and environmentally-friendly products have a longer service life than ordinary products. Therefore, it can bring real benefits to the user. benefit.

中小企业数量占中国企业总量的 90% ，随着政府采购规模的逐年增长，授予中小企业的采购额自然会增长，加之在《政府采购促进中小企业发展暂行办法》中明确采取预留采购份额、降低门槛、价格扣除、鼓励联合体投标和分包等具体措施促进中小企业的发展。 Pei Yu: The number of SMEs accounts for 90% of the total number of Chinese enterprises . As the scale of government procurement grows year by year, the amount of procurement granted to SMEs will naturally increase. In addition, the Interim Measures for Promoting the Development of SMEs by Government Procurement have clearly adopted Specific measures such as retaining procurement shares, lowering thresholds, price deductions, encouraging bidding and subcontracting for the Commonwealth to promote the development of SMEs. As a result, SMEs' access to government procurement quotas has grown relatively faster. Specifically, SMEs are mainly distributed in the areas of daily supply of goods, services and projects required by various administrative institutions. They are flexible, convenient and efficient. After more than a decade of government procurement practice tests, SME suppliers can The daily procurement needs of such administrative institutions. Therefore, it is reasonable for the requirements of policies and the initiative of SMEs to increase government procurement quotas year by year. 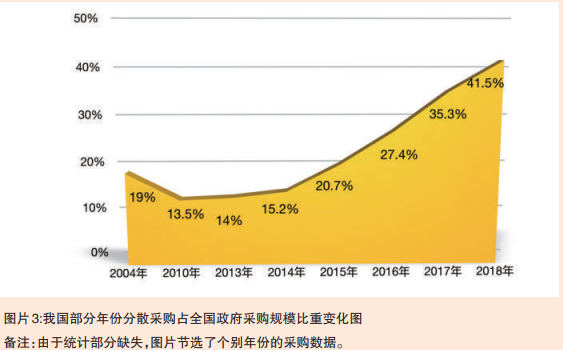